Posted on August 22, 2015 by solwayshorewalker

On a very low Spring tide in August, my guide Mark Messenger and I crossed and re-crossed the Solway on foot, from England to Scotland and back. We waded across the Firth through the outgoing tide and the flow of the Rivers Eden and Esk, a little to the East of the ancient Wath which runs from Bowness to Seafield in Scotland.

The ancient Bowness or Annan Wath is one of the shortest foot-crossings of the Firth proper. It was used by William Wallace and Edward I during the Scottish Wars of Independence, and by cattle drovers, driving their beasts to English markets, until the new railway viaduct came into commission in 1869. More recently, Hugh Dias, co-author of the beautifully illustrated book ‘Exploring Solway History’, told me, “ We were warned about the tides but were sort of free range. It was my elder sister and two female cousins who one day crossed the Bowness wath to Scotland. They must have been in their mid teens when they did it and as far as I know their parents were clueless about what they were doing…” But as he notes in his book, “they lived to tell the tale”! 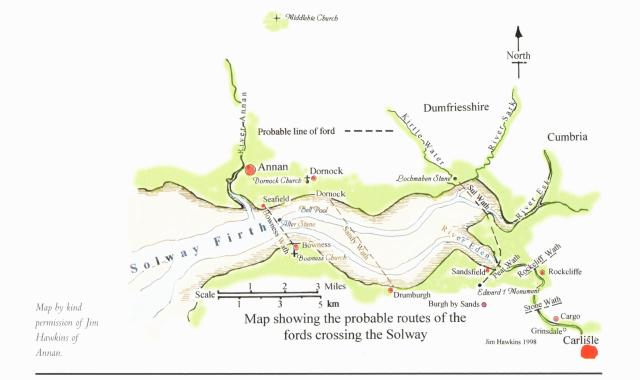 The waters of the Firth acted as an international frontier, across which the English and Scottish armies attempted to by-pass the land defences. Although it’s difficult these days to identify the various waths other than through historical accounts, partly because the topography of the shores and marshes have changed so dramatically, the three main waths were the Sulwath across the mouth of the River Esk, the Peatwath across the River Eden, and the Bowness wath across the Firth. 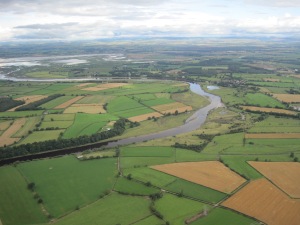 The meandering R Eden, with Rockcliffe marsh beyond. Peatwath was probably near the middle of the upper (in the photo) loop (photo: Ann Lingard)

There was also the Dornock or Sandy Wath across a broad stretch of the Firth from Drumburgh to Dornock; Blawath a little further to the East; and shorter waths – Rockcliffe Wath and Stoney Wath – across the Eden, and Loanwath across the Sark.

“The Solewath, Sulewad, or Sulwath, [is] a word which easily explains itself. Sol is a term, common to Anglo-Saxon and to the Norse languages, for mud. Anglo-Saxon woeth – Norse vad or vath… is a word for ford. Sulewad or Sulwath means therefore the muddy ford.” (Neilson 1896)

In November 1896, George Neilson read a long and well-researched paper on The Annals of the Solway Until A.D. 1307, at a Meeting of the Glasgow Archaeological Society. In this paper (reproduced on Steve Bulman’s website about Cumbria) he argues convincingly that the Firth’s name derives from its main wath:

“The evidence of the thirteenth century, therefore, sets forth a number of propositions which the course of subsequent history amply confirms. These are:
1. That Sulewad, Sulwath, or Solway, interpreted by the earliest allusions to it, did not denote an arm of the sea, did not indeed denote even a river, but was a distinctly limited locus, a point or place upon a river.
2. That it was a meeting-place for the administration of border law.
3. That it was a place where the English escort might meet a royal visitor passing into England.
4. That it was on the marches of the realms.
5. That it was on the river Esk.
6. That it was already recognized as a regular crossing place.
These facts lead to an induction as little open to question as themselves, namely, that the original Solway was a ford across the mouth of the Esk.”

Neilson’s researches into old documents and maps led him to conclude that during the 300 years up until the end of the 19th century the eastern boundary of the Firth had gradually extended nearly 3 miles to the West: Rockcliffe Marsh had grown, bulging out into the sea. “Many an acre now under the plough, or green with rich merse grass, then formed part of the sands of the Solway.”

And, pleasingly, he pays attention to the underlying geology: between the mouths of the Kirtle and the Sark on the Scottish side, there was “unmistakable hard ground … Of a firm and gravelly structure”, well-suited to forming the base of a ford. He suggests therefore that the start of the Sulwath was marked by the Lochmabenstane (a “weather beaten sentinel grown grey with centuries of duty as watchman of the ford”) near Gretna, and ended near Rockcliffe where a ferry crossed the Eden at Stoneywath.

Miscalculated crossings
There are many interesting, often horrifying stories, in Neilson’s paper about the to-ing and fro-ing of English and Scottish troops across the Firth in the 13th and 14th centuries. In February 1216 followers of Scottish King Alexander II, laden with spoils from pillaging Holme Cultram Abbey, were crossing the ford on the Eden when the incoming tidal bore overtook and drowned 1900 men.

In 1300, when English ships were provisioning the army, “Victuals, in course of being taken with two carts and seven horses to Lochmaben, were carried off by the Scots ‘in the passage at Sulwath.’ The incident is typical of the guerilla warfare pursued by the Scottish army.”

In 1307 Edward I was again sending troops to wage war against the Scots; despite growing ever weaker from dysentery, he insisted on being carried across the Solway as an example to his troops. “Daybreak on 7th July, 1307, found him in camp on the shore north of Burgh by Sands. The road for Scotland lay in front across the fords – the Stonywath, hard by, over the Eden; and the Sulwath, two miles distant, over the Esk. As his attendants were in the act of raising him to give him food he collapsed in their hands, and the mighty spirit passed away.” (Neilson 1896).

A line in the sand.
Stand still in the middle of the Firth and the current swirls the sand from beneath your feet. Yet, there in the water, you are standing on a metaphorical line in the sand, part of a border which was contested for centuries. Now, although these waths are mostly forgotten, as cross-border routes they still have great political and social significance.

As Rory Stewart MP writes, of his own crossing at Bowness, “On one side [of the invisible line], the Scottish state possessed absolute power, but at the millimetre line of the border, its sovereignty ended. On this side of the line, the English were citizens in their own nation … Step one foot across the mid-point of the Solway, and they were aliens…” It is his hope that “the Solway will always remain, as it is now, the ambiguous, opaque, tantalising, meeting of nations; but never again a frontier to make us foreigners.”

A pdf of the Annan shore-walk, showing Jim Hawkins’ map of the probable fords.