Snippets 6: ” ‘Tis the voice of the lobster’ I heard him declare…”

Posted on October 21, 2015 by solwayshorewalker 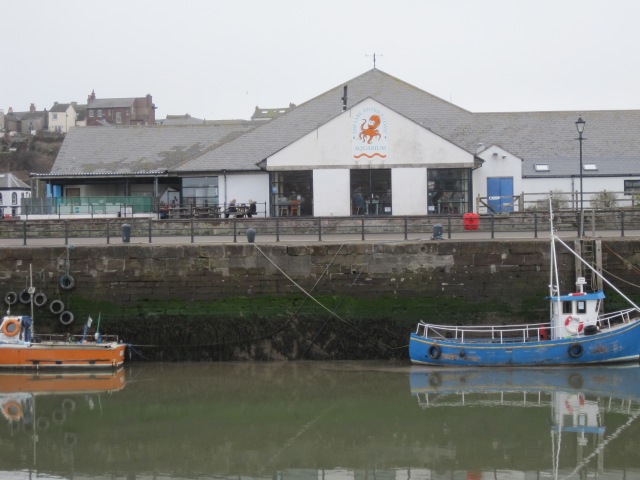 Cumbria isn’t just about the National Park and Herdwick sheep, but even on the Solway coast, it sometimes helps to have ‘Lake District’ in your title. The Lake District Coast Aquarium at Maryport is a little gem of an aquarium in a perfect setting: trawlers moored in the harbour, views over the Firth to Scotland, a fish-shop that sells the local catch. And inside the aquarium, many of the tanks are set up as local habitats with local fish and invertebrates, ranging from conger eels to plaice to pipe-fish and beadlet anemones, to whelks and sponges and brittle-stars. Paul Sloan, chief aquarist and an enthusiastic shore-walker, and his colleagues have also had success in raising sea-horses and jellyfish. Periodically a wave crashes through a large tank of fish, and you can even hang over the tank of skates and flatfish and dogfish to ‘stroke a thornback ray’. The lighting is dim, the floor is damp, and the interlinked rooms smell of the shore.

But back in July a bright new extension, the Sea Lab, was opened, partly paid for by Cumbria Fisheries Local Action Group, FLAG. Amongst the treats such as a dome in which you can sit and be surrounded by fish, and microscopes for seeing high-power detail of plankton and algae, there is the lobster hatchery. 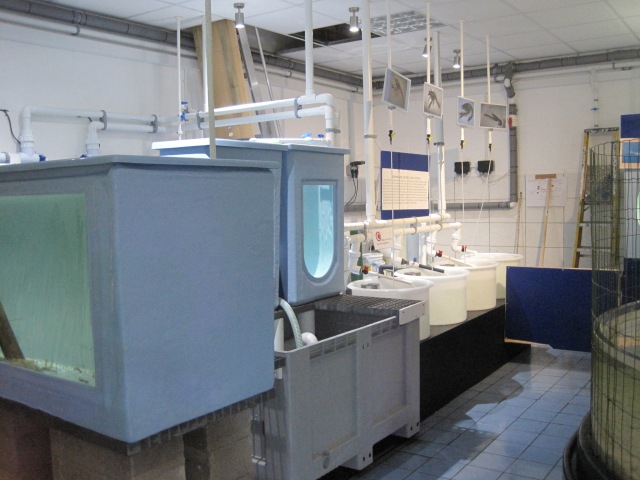 The lobster hatchery in the Sea Lab

For very young lobsters, the sea is a dangerous place and a high proportion are lost during early life. But they spend the first 8-9 months of their lives safely attached to their mother.

Through the autumn and the winter, the ‘hen’ lobster broods her basket of eggs, as bright as crowberries, under her tail, tucked in beneath her swimmerets. Inside the eggs, the embryos go through early development stages such as the delicate transparent nauplius (the nauplius stage is also passed through by crabs and even barnacles.).
The lobster’s first-stage larvae, the L1s, eventually hatch and are released into the water to survive as best they can, feeding, and moulting three times until they reach the L4 stage. Now, finally they are starting to look like mini-lobsters, and at this stage they drop down to the bottom of the sea, each excavating a burrow in which it can hide and feed and grow. From now on it will lead a benthic, crawling, life.

If a lobster can survive to this stage it has a much-improved chance of surviving to adult-hood – and it’s the aim of the aquarium’s staff to get them through those early months before releasing them into the Firth.

Paul showed me how the hatchery worked. There was a hen lobster in the tank, but she was soon to be released because her eggs had hatched. ‘We’ve had six or seven hens over the summer,’ Paul told me. ‘The local fishermen bring them in and we keep them in the tank until their eggs hatch.’

Because the larvae, which are only 1-2 mm long at this stage are planktonic, they tend to swim up to the surface where they can be drawn off into a separate tank and then into conical containers. During this time they’re fed, and the water in the tanks is constantly circulated, aerated and filtered to reduce build-up of bacteria and protein ‘froth’.
The speed at which the larvae grow and develop is dependent on the water-temperature – and at 15-18 degrees C it takes about 6 weeks, Paul said, before the larvae moult to L4 and can be moved on.

Now they’re about 5mm long and brown and it’s easy to see their long front legs with pincers. They’re also very predatory – and because any other sibling is seen as potential prey they are separated off into individual compartments in special trays. 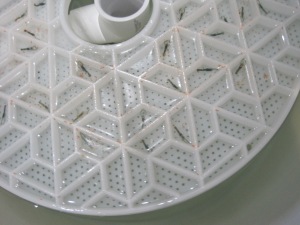 Stage 4 larvae in a hive tray

From there, it’s off to the hive! The trays are stacked within the circulating water column and each L4 eats and grows and moults; there are three moults within about 2 weeks, and the newly-moulted animal eats its cast skeleton – after all, it’s a good source of protein and minerals. Meanwhile, Paul and his assistants are feeding all the larvae three times a day with a ‘soup’ of other planktonic crustaceans, the copepod Calanus. 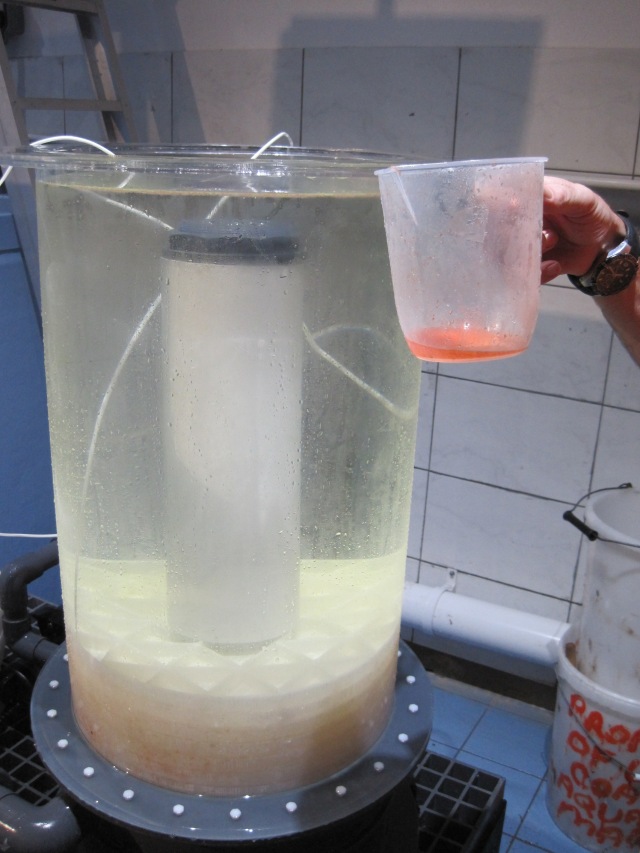 Paul feeding the hive with the Calanus ‘soup’

The baby lobsters will stay in the hive system for 2-3 months before being released into the Firth.

There are various plans for how best to release the new stock. Divers might take a stack of trays and release the lobsters on the bottom; or containers – covered by a thin tissue membrane – might be dropped within lobster-pots. When I spoke to Paul in early October, these details hadn’t been finalised with North-West IFCA but he was hopeful that releases would occur very soon.

It’s always a pleasure to visit the aquarium in Maryport, there’s always something new and interesting. Today the two conger eels had partly emerged from their ‘caves’, and the size and thickness of their bodies was all too apparent. 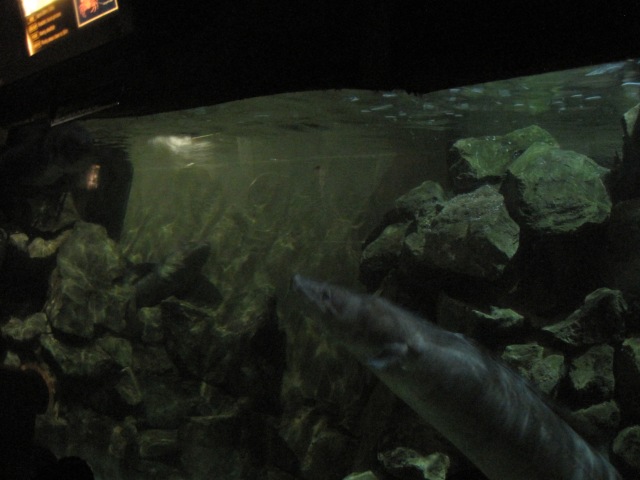 In the Lobster Hatchery, young thornback rays, speckled pale brown, circled their tank or flattened against the sandy bottom. They had hatched from eggs laid last August by adult females in the large tank, the ‘touching tank’ where you can reach in and ‘stroke a ray’. 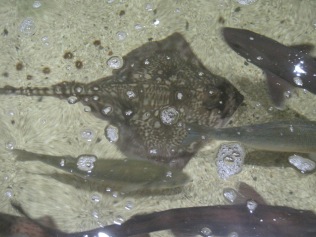 Adult ray in the ‘stroking tank’ 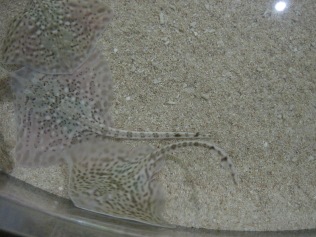 In the Lobster Hatchery itself is a display of photos recording the licensed release of young lobsters last August into the Firth near Ravenglass ‘where they were conceived’. 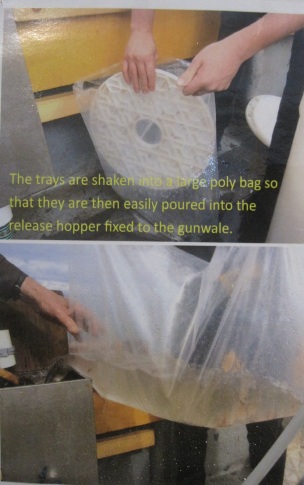 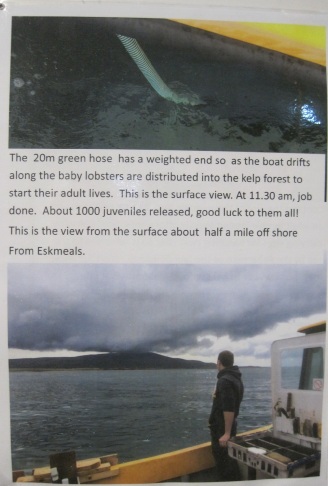 As Paul had described to me previously, the baby lobsters were tipped from their hive trays into a plastic container, then poured into the release hopper, and thence into a weighted hose that deposited them on the sea-bottom as the boat drifted.

The site had been chosen for the cover of kelp that would provide a safe haven for the small and still-vulnerable creatures. More than 1000 young lobsters were released last year, and the Hatchery continues to do well: three new ‘berried’ females are due to arrive to supply the necessary eggs for this year’s rearing and release.