Sandstone, ‘smooth as walnut turned on a lathe’

Posted on December 3, 2015 by solwayshorewalker 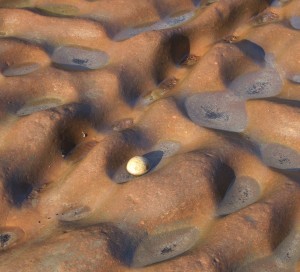 “Fine sandstone is quite silky, you get a crisp image, the maximum sculptural effect. With sandstone there’s no reflection of light to distort what you see.” Sky Higgins, sculptor.

“Red St Bees’ is a fine-grained stone, dull red in colour… it is susceptible to weathering in very salty environments… The abrasion resistance is towards the lower end of the range.” Building Research Establishment 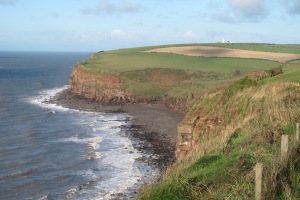 We walk over the fields above the blocky red cliffs, hunched against the November gale; below us shags are paragliding straight-winged, leaping from the ledges and swooping downwind before looping back to do it all again. We slither down a slimy track strewn with windblown plastic and wrack; a narrow entrance, ahead of us a V of shore and sea – and then we walk out into the vast amphitheatre of Fleswick Bay, an echo-chamber reverberating with the sound of waves and gulls. (For the rattling, sucking sound of the sea on shingle, visit the Sounds of the Shore project, and click on the marker for nearby St Bees’.)
Pebbles roll and slip beneath our feet; smooth, colours gleaming where they are wet. In no time I have a pocket-full, to add to the collection at home. 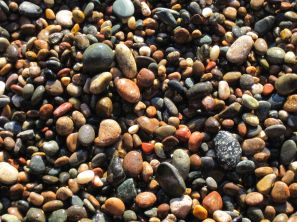 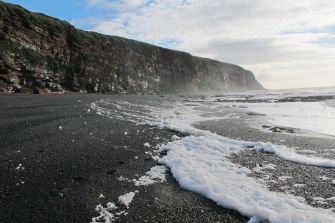 Ragged balls of foam are being blown along the shore, torn from the glistening white mounds that fringe the incoming tide. Foam clings to our hands and boots and I wish my grandchildren were here to scoop it up and cover themselves with iridescent bubbles. 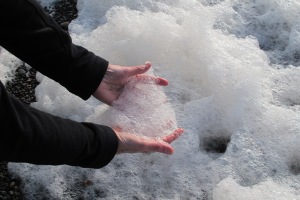 But whether we are examining the rusty winding-gear of a long-wrecked trawler, or enjoying the exquisitely-built tubes and colonies of the honeycomb worm, Sabellaria, it is the red sandstone that dominates attention. 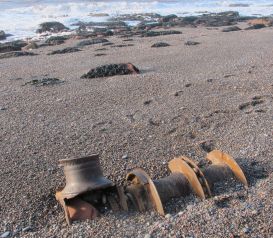 Winding gear from a wrecked trawler 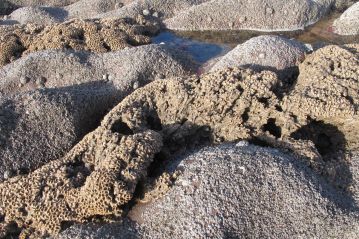 Colonies of the honeycomb worm, Sabellaria alveolata, on the rocks mid-shore

This New Red Sandstone was laid down about 200 million years ago (Mya), during the Triassic, when ‘Britain’ lay much further South, roughly at the latitude of today’s Sahara Desert. It was an arid country, dry and dusty, but occasionally torrential rainstorms over the mountains to the south and west caused flash floods, which eroded the rocks and deposited huge amounts of sediment on the plains. It is this sediment that was compressed to make the sandstone of St Bees.

Sandstone comes in many colours and grain sizes and shapes. Iron oxide around the sediment particles was further oxidised to form red haematite, which gives St Bees’ stone its characteristic colour. It’s a stone that glistens with mica particles, a further indication that – unlike the ‘Lazonby’ red sandstone around Penrith – it was formed in water not in deserts: mica flakes are light and buoyant, they would be blown away by wind but settle slowly in water to rest on the sand.

It’s a stone that you have to touch and stroke, even in its natural state on the shore, where sculpting by waves and water-stirred stones has created delicate hollows and ridges. Monumental rounded and undercut figures and shapes huddle beneath the cliffs, and coloured pebbles, sand grains, shadows and the changeable light from sky and sea, challenge perspective and perception. 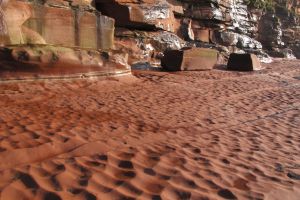 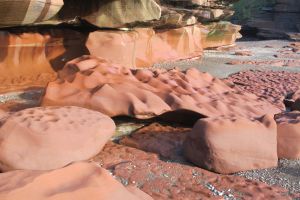 Fleswick Bay, with its high red cliffs and rocky shore, is the only cove on the English side of the Solway and is a place where smugglers have brought their goods ashore, where boats have been wrecked and where families – including those of former coalminers – have come to enjoy the sea.

Amongst the many people who have carved names in the rocks is the stonemason James McKay who carved the name of his girlfriend, his wife and his daughter Judy.

The friend who is with us is an industrial archaeologist, an expert on quarrying; he has become distracted by marks high on the cliff near the entrance to the bay and he climbs up to have a closer look. The rock-face is scarred by the marks of pick-axes – men must have worked there to cut and remove some blocks of stone. But how would they have transported them? By horse and cart? The blocks must have been small because the way up from the shore is rocky and narrow, scoured by the tiny beck. 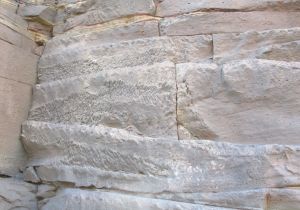 The marks of picks used to cut out the stone

There are much easier – but more conspicuous – places to acquire red sandstone.
From the nearby village of Sandwith, we drive up a ‘Private Road’, and park by the cottages at Birkham’s Quarry. Records show that the site has been quarried since 1861; there’s a suggestion that it has been worked since mediaeval times. Now run by Stancliffe, part of the Marshalls company, it is used for a couple of months each year to extract stone for building and cladding purposes.

The quarry is in an area of conservation acronyms and designations: the St Bees’ Head SSSI, the Cumbria Coast MCZ, the Heritage Coast, the ‘Colourful Coast’; its eastern side is a Local GeoConservation Site (and in July 2016 information panels were put up to explain the area’s geology); it’s on the edge of the Coast to Coast path and the England Coast Path National Trail, and is about 800m from an RSPB public reserve.

When a coastal footpath was re-routed to skirt round the western edge of the quarry there was an outcry, but from the new path, now well blended with its surroundings, there are excellent views: into the quarry itself, and outwards along the coast to the North-East and across the Firth to Scotland. 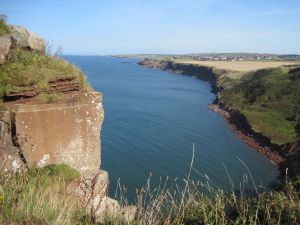 Looking North to Whitehaven from the new stretch of coastal path by Birkham’s (photo: Ann Lingard)

Birkham’s is a small and historic quarry, part of West Cumbria’s and the Solway’s cultural heritage. Recently Marshalls’ licence was extended until 2030, partly on the grounds that this type of sandstone is important for restoration and renovation projects, both in the UK and abroad. 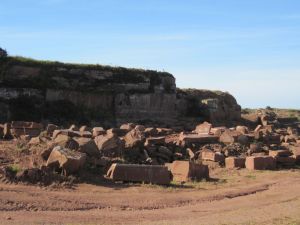 When flash-floods dumped sediment on a coastal plain, 230 Mya, the diversity of life on the massive continent of Pangaea was only slowly recovering from the great Permian extinction. But now the result of that sedimentation and compression, the New Red Sandstone of St Bees’, is finding new expression. Sculptor Shawn Williamson told me how Realstone ‘sourced [him] a beautiful piece of Beestone’, more than 3 metres high, which he turned into a statue of ‘Lang Sandy Armstrong’ of Canonbie. Blocks of Beestone have been cut and sculpted as St Jerome’s lion, a boar, a phoenix, a mermaid, and more. 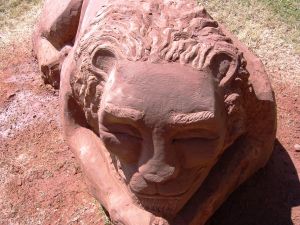 Back on the shore at Fleswick Bay, the friction of waves and sand has been slowly remodelling the sandstone into contours that we have to touch, and stroke.

We have to stop, and sit, and stare. 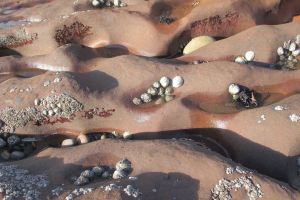 The stone is grained,
Smooth as walnut turned on a lathe,
Or hollowed in clefts and collars where the pebbles
Shake up and down like marbles in a bottle.
Here the chiselling edges of the waves
Scoop long fluted grooves, and here the spray
Pits and pocks the blocks like rain on snow.
Slowly the rock un-knows itself. 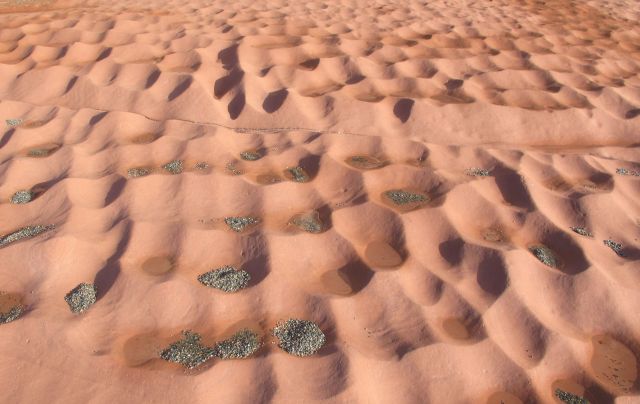 (All photos are courtesy of Dr Peter Stanier, unless otherwise stated.)