Posted on February 8, 2016 by solwayshorewalker

‘ ... the tide holds back from the flat wet sands / That darken from tawny to brown, where little pools / Are stranded like starfish in the rippling ribs’.  Norman Nicholson, The Bow in the Cloud

There is a very low Spring tide and we’re setting off down the shore, a group of people, all ages. We cross a bank of shingle, chatting, asking those questions that are a preliminary to spending time with each other for a couple of hours: ‘Where do you live?’, ‘Do you know so-and-so?,’ ‘What’s your dog’s name?’

Then we go down onto the sand, an apparently featureless expanse that stretches down to the distant rocky scaurs. ‘It looks pretty flat and boring, doesn’t it?’ I say.

But as we walk, we find domes and repeating ‘waves’; there are hollows and inexplicable smooth-walled channels. In places the domes are smooth, elsewhere the sand’s surface is patterned with ripples, patterns that can differ from metre to metre. Some of the hollows between the crests have accumulated finely contrast-y grains of coal. Photographers get busy.

Do the ripple-patterns form when the tide comes in or when it goes out? Do they form and reform all the time they are submerged, according to the ebb and flow of the water?

The shore is a good place for stimulating simple questions. But, as we might expect, the answers aren’t always simple.

There has long been research into wind-blown – ‘aeolian’  – ripples and dunes, and geologist Michael Welland and physicist Philip Ball, both of whom have written about sand and patterns and are excellent science communicators, refer to early work by Bagnold.

Bagnold, incidentally, is currently (February 2016) being celebrated – on Mars.

(NASA/JPL-Caltech/MSSS) shows the rippled surface of ‘High Dune’, the first Martian sand dune ever studied up close, and part of the ‘Bagnold Dunes’ field. Amazingly, the dunes are actively migrating, at up to about one metre per year.

Ralph Alger Bagnold joined the Royal Engineers in 1915 and was posted to Egypt, where he fell in love with deserts, and subsequently spent his leave-time exploring these ‘seas of sand’ in Egypt, Libya and Sudan, where “Instead of finding chaos and disorder, the observer never fails to be amazed at the simplicity of form, an exactitude of repetition and a geometric order …”.

Back in England, although he considered himself an amateur scientist, he built his own wind-tunnel with some help from the hydraulic lab at Imperial College and carried out research on the physics of sand movement and the evolution and migration of sand-dunes.

His 1941 book, The physics of blown sand and desert dunes, is a classic.

On a windy day in the Moroccan Sahara desert, experiencing the saltation of sandgrains for myself and seeing evidence of dunes’ migration across the bed of a long-gone river, I did indeed think of Bagnold.

Many of the ripple patterns I saw in the arid Sahara were the same as those we walk over on the Solway shore at low tide, so I was delighted to find that Bagnold – now interested in the effect of waves on the sea-bed as a marine engineering problem – had moved on in 1946 to look at the effect of water in forming sand-ripples and vortices.

He used a tank of still water in which he oscillated a flat bed of sand, so his results don’t answer my simple questions, but a couple of his photos, including the ‘brick pattern’, nevertheless show patterns similar to those that we can find on the shore.

There has of course been more recent research into the effects of waves on the formation of ripples in both deep and shallow water. This hasn’t been merely from an aesthetic point of view. Instead engineers have been interested in the effect of the shape and migration of ripples on sediment transport on or off a shore, and geologists and geophysicists want to know how the orientation of present-day ripple-patterns in sedimentary rock, such as sandstone, relates to the shape of ancient shores. (There are some excellent diagrams, photos and videos about the origin of ripples, from a geological point of view, on this US Geological Survey website.) 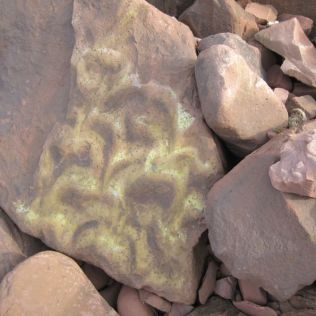 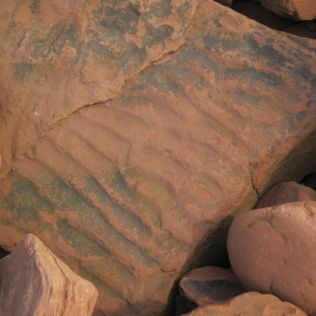 Moreover the migration or collapse of undersea sand-waves interests hydrographers – and is especially relevant to ships’ pilots here on the Solway Firth.

Much of the research has been done in labs under controlled conditions with single variables (here’s a useful film of sand in a flume-tank, showing development and migration of ripples, formation of vortices and scour-pits).

Research which has been done ‘in the field’ has used acoustic methods such as sonar to measure height, time-lapse photography to measure changes in shape, still photos to examine types, and other types of measurements to determine grain size, friction and angle. Many of the interpretations rely on equations for flow and drag and friction – and field studies are complicated by the everchanging conditions of wind and sea.

Some are self-evident, others too complicated for this blog-post (or me).

Type 1 in transition at the edges

1. Ripples come in different shapes. Straight ripples are two-dimensional, 2D; those that bifurcate – branch – are 3D. The pattern depends on the direction and velocity of the waves.

Boyd and colleagues’ time-lapse photos taken on a beach show 6 types (shown diagrammatically above) : Straight-crested 1 and 5 were in ‘equilibrium’ with local dynamic conditions (the angle of the waves’ approach, and the nature of the flow over the surface) – when the bedform is fully adjusted to local conditions, then you see these simple geometric patterns. The other types show disequilibrium in both shape and orientation, in other words they’re shape-changing and readjusting to local conditions.  Type 3 is a decay form of type 1 as a storm wanes. Type 6 shows reorganisation during a complete change in wave conditions such as the onset of a storm.

Several of these types can be created in a flat bed of sand in a flume tank; their shape-changing is mesmerising.

2. Ripples grow in size as the tide comes in. As measured on a tidal beach in France, Austin and colleagues found (2007) that both the height and length of ripples increased during the rising tide – and remained constant during the ebb. (In contrast, Dingler’s team (1984) found that the spacing of ‘high-tide’ ripples changed dramatically as the tide ebbed; but there was no change in the pattern of ripples nearer the bottom of the shore.) And a stormy ebb tide may delete or smooth out the ripples formed during the flood.

Underwater ripples in the Inner Solway

3.The orientation of ripples changes. Ripples respond quickly to changes in wave direction. Boyd and colleagues found that the ripple-pattern on their beach shifted through 15 degrees during a 4-hr period, then back through 38 degrees during the next 36hrs. Moreover – probably a disappointment to geophysicist detectives – ripple orientation was not related to orientation of the adjacent shoreline.

4. Ripples migrate. Each wave sets up an orbital flow of water that moves sandgrains. Ripples build up asymetrically, with a steeper offshore side. Since the onshore velocity of water is higher than the offshore, sand is carried up the offshore side of the ripple and over its crest. Some of this sand is caught in the developing lee vortex, which also captures sand from the onshore flank.
As wave-flow slows, the vortex increases and captures more sand – this is ejected into the main flow above the ripple at about the same time as the wave’s flow reverses. Nevertheless, most of the sand that has been carried over the crest during onshore flow instead slumps down the onshore side – and because of this, the ripple effectively migrates onshore.  Well, mostly: Doucette (who must have had such a tough project, based on an Australian beach) found that large 2D ripples migrated onshore during a ‘narrow-banded swell period’, but when a sea-breeze was present too, the ripples migrated offshore.

5. Sediment migrates. Some of the sediment that is carried over the ripple’s ridge is stirred up and ejected from the trough during the suck and flow; when the flow is strong, this sediment may be carried offshore again – so although ripples migrate onshore, the net sediment transport might be offshore.
But it depends on the size of grains. Medium-sized grains tend to behave differently, and net transport is onshore. Sand at Sennen Cove (Cornwall, Masselink’s work) behaves differently from sand at Allonby Bay (Solway).

Coarser particles – coal – on the onshore side of ripples

6. Sediment ‘sorts’. Sediment sorting means coarser sand moves onshore with ripple migration (the ‘Brazil nut effect), and there is net offshore transport of finer sediment in suspension. Coarser particles – including coal fragments – are found on the onshore side of ripples. 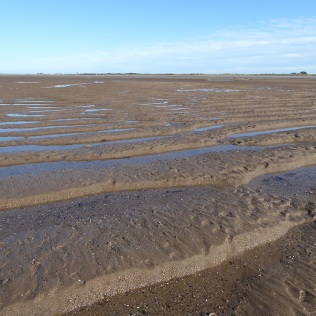 Short-wavelength sand-waves on the shore 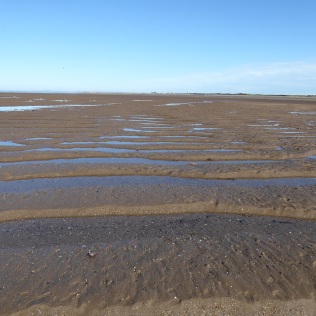 Seen from the vantage-point of a gyroplane flight during a very low tide over the Inner Solway, the patterns of the  mega-ripples and sand-waves, in shallow water or exposed, are striking.

Other answers and ‘known unknowns’

The shore is not a lab: you can’t control the variables.

I have learnt (from reading) that on the shore, even if measurements are made at the same place under similar conditions of wind and tide, no two results will be the same.

I’ve learnt that such is the diversity of response of the Solway’s sediment and sand to the sea, that it must surely provide one of the most challenging and potentially fruitful places for further research on ripples.

And I have learnt (from experience) that the patterns of ripples on the Solway shore are beautiful, and tantalising, and tell stories of the dance between the sea, the estuary, and the sediments, on calm days and on windy days.

The tide creeps in quietly at Allonby Bay