Posted on June 13, 2016 by solwayshorewalker

Low tide at Dubmill, looking across to Criffel (Thanks to Alan Sawyer for this photo)

Allonby Bay, on Cumbria’s Solway coast, recently became a Marine Conservation Zone; there are now 50 MCZs in English and ‘non-devolved’ waters and proposals for more are under consideration.

Most people, probably, neither know nor would they care.

Here are some figures, taken from a 2008 survey carried out for Natural England (1):

There’s also a North-South divide: “Northerners describe ‘their’ sea as dirtier and colder than the rest of the country and cite industrial pollution as a big factor in this.”

Sir Martin Holdgate, Trustee for Cumbria Wildlife Trust, noted at the North-West Wildlife Trusts’ Irish Sea conference a couple of years ago that “it is difficult for us as land-mammals to understand what is going on in the oceans.”

A sea of acronyms

Another part of the problem is the complicated sets of acronyms and conservation designations, and legislative bodies (if any) who over see them. The Allonby Bay Marine Conservation Zone (MCZ) is a type of Marine Protected Area (MPA); much of the Firth is also a European Marine Site, which encompasses various other types of designation (SAC, SPA etc).

It is a relief to know that so much of the Firth’s special habitats and wildlife is under statutary protection (although unfortunately this doesn’t necessarily mean active protection and management), but most people – understandably – are unaware of, or don’t understand the meaning of, the acronym-ed areas. Conservationists banging on about, well, conservation, yet again. Hard to get excited …

To help with that, I strongly recommend the Solway Firth Partnership’s very readable, clear and informative explanation of the Solway’s various protected areas and their designations.

And the Joint Nature Conservation Council (JNCC) has a helpful interactive map of the UK’s MPAs – home in on the Solway, increase the magnification, and click on the areas outlined in colour to see what type of MPA they are and what are the features responsible for that listing.

Of course, more interest might be stirred if some major threat to the sea or shore is observed or proposed: dumping of rubbish on a large scale, say, or huge jetties for a quarry, or large spills of oil or toxic chemicals. Even then, the emphasis might initially reference the economic and health consequences for the local human population.

This sounds like a harsh judgement, but realistically, how many people really care about fish? ‘Iconic’ species like whales and basking sharks (we don’t have any polar bears in the Firth) are always news-worthy, but who bothers about honeycomb worm reefs, starfish, soft corals, sea-slugs and the planktonic larvae of barnacles? Or the different colours and species of algae?

These organisms might sound trivial (invertebrates, weeds!) yet they are a vital part of the great web of interactions that populates our seas.

DEFRA, in their email announcing the new tranche of MCZs, explained how the MCZs ‘will extend the country’s ‘Blue Belt’ to cover over 20% of English waters providing vital protection for the diverse array of wildlife in our seas.’

The language helps. ‘Blue Belt’ has a good visual image.

‘Wildlife Corridor’ (which would be one important result of the Blue Belt) also gives us an image with which we are already familiar (animals scurrying through interlinking hedgerows, and along tree-clad motorway and railway embankments).

So, to imagine corridors in the sea, we need to populate those corridors with marine animals and plants.

To do that, we have to ‘see’ the features, and the creatures that move or are fixed in place, the prey and the predators, the larvae and other offspring – in what is essentially their own ‘urban’ environment: creatures living in a place that is not barren or slimy or disgusting (because if it is any of those things, we have made it so).

What is Allonby Bay MCZ?

Allonby Bay MCZ is an inshore site stretching approximately 9km along the coast from Dubmill Point to just north of Maryport, and about 4km out into the Firth; this map, taken from the designation document, shows the position and the co-ordinates.

It has an area of 39km2  – that’s an area approximately 1/540th the size of Wales, or equivalent to about 7000 football pitches (but volume, in terms of Olympic swimming-pools, varies according to the tide).

It was “recommended as an MCZ because of the diverse range of marine habitats and species it supports. In particular, this includes large areas of nationally important living reefs, formed by the honeycomb worm (Sabellaria alveolata) and blue mussel (Mytilus edulis) beds…. [which] can extend for tens of metres across and up to a metre tall. In an otherwise ever-changing environment, these reefs are able to support a wide range of other shore dwelling species including anemones, snails, shore crabs and seaweeds. … Allonby Bay supports some of the best examples of these reefs in the UK. The peat exposures provide a habitat which piddocks, a type of burrowing clam, and other species can tunnel into.” (Natural England document, p50)

The whereabouts of the special features that make Allonby Bay an MCZ – including the mussel beds, honeycomb worm reefs and peat exposures (part of the submerged forest) – are shown in these maps. 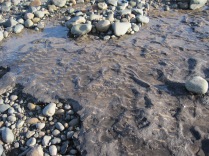 And you can read much more about them in separate, illustrated articles, on Solway Shore Stories.

What can you do, and not do, in Allonby Bay MCZ?

You can still enjoy swimming, recreational sea-angling, sailing and wind-surfing, kayaking, walking the dog and eating ice-creams – there will be no change.

As for commercial fisheries, the fishing industry and the North-West Inshore Fisheries Conservation Authority (NW IFCA) were amongst those involved in the initial discussions. Dredging and trawling within the MCZ would clearly damage the sea-bed but, as Dr Emily Baxter, Marine Conservation Officer for the North-West Wildlife Trusts, told me, “They are not automatically prohibited”; however neither trawlers nor the shrimp-boats from Silloth work in this area. As David Dobson, formerly of NWIFCA, said, “The ground’s too rough – the shrimp-boats avoid it like the plague, it does too much damage to their nets.” Again, no change.

Who will oversee the protection?

There are various organisations responsible for overseeing the MCZ status, listed on the government fact-sheet about MCZs in general (an extract is shown here). 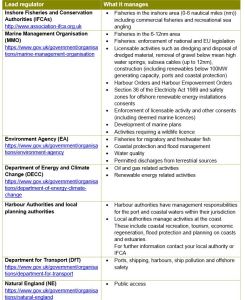 The Marine Management Organisation (MMO), based at Whitehaven, oversees fishing within the 6-12 nautical mile zone – but their management won’t be necessary since that’s outwith the Allonby Bay MCZ’s limits.

NW IFCA will oversee the shell-fisheries: the cockle- and mussel-fisheries, neither of which have actually operated for several years, are protected by Bye-Laws and have in any case always required licences and oversight from NWIFCA.

Some – although not all – of the intertidal honeycomb worm reefs, too, are already protected from bottom-towed fishing gear by NWIFCA’s Byelaw 6.

In reply to my question about management, Mandy Knott, Senior Scientist at NWIFCA, told me: “You are right in that we do not anticipate at this stage that there will be any additional management required for the Allonby Bay MCZ as far as fisheries are concerned. … The Conservation Objective [CO] for the site is ‘maintain’ and there are therefore no immediate causes for concern as long as activity within the site remains constant or decreases. The NWIFCA monitors all fishing activity in its District, both commercial and recreational, and should levels increase then a relevant assessment of risk and impact on features will be carried out, in consultation with Natural England. Should evidence show that management is required then the NWIFCA will act accordingly.”

However, Dr Emily Baxter of the NW Wildlife Trusts thinks it might well be necessary to keep an eye on the fisheries: “Even though the CO is ‘maintain’, this does not mean do nothing, and active management may be required to manage existing activity and future-proof the area from potential damage.”

This at least gives hope that the MCZ will not merely be a ‘paper park’, as Professor Callum Roberts maintains for MCZs in general; you can read his Guardian article here, or watch him talking to Tom Heap on BBC’s Countryfile (at about 8 minutes in)

As for harbours and ports, the Port of Silloth is outwith the MCZ, although the Solway Buoy is stationed just within the area.

But one important aspect of management is down to DECC – and that concerns coal and oil extraction. We shouldn’t forget that Cluff Resources are maintaining their Solway licences for underground coal gasification in the Allonby Bay area; at the moment all is quiet on that front, but …

Basically, then, it’s all rather unexciting,  and we can probably all carry on much as before, in Allonby Bay. Or can we?

When I’ve taken people down the beach on good low tides, we reach the first signs of the honeycomb worm (Sabellaria) reef and I often ask if anyone notices something different about the rocks. Some do, but at first many don’t, notice that the ‘rocks’ are actually intricate masses of sandy-tubes built by the Sabellaria. And so often, someone then remarks, “I just thought they were rocks!”

And within the next hour or so, we watch crawling, grazing winkles; find dog-whelks preying on barnacles; ‘baked bean’ tunicates and different types of sponges living amongst the reefs; dahlia and beadlet anemones, feeding tentacles extended or tucked inside their stomachs; eggs of dog-whelks and ragworms; the shelly tubes of mason-worms; the coils and holes of lugworms; gammarid shrimps, small fish, brittle stars …  Many of the sessile animals are quiescent, just waiting for the tide to come in. Many of the predatory animals – ragworms, crabs – have hidden, leaving behind only their footprints. We see how every hard surface in the intertidal area is coated with animals and algae.

All this, so many species, so much busy-ness, even when the tide is out! (Enjoy these photos of organisms in the new MCZs on the Guardian website.) At low tide we get a snapshot of the Allonby Bay Marine Conservation Zone.

But now imagine it when the tide comes in, bringing food, planktonic larvae, predatory fish. Colourful algae, flattened on the rocks when the tide is out, are buoyed up and swaying in the current; tube-worms and anemones and barnacles extend their arms and legs, mussels filter the water to catch their food, ragworms and crabs hunt for live prey, limpets and chitons crawl, grazing. Fish browse, chase, mate.

All these organisms interacting in different and subtle ways, a complex meshwork – a ‘Living Sea’.

Allonby Bay is not just about ice-creams and acronyms.

Join me on a low-tide shorewalk to discover more about Allonby Bay. Full details are on the Solway Shore Stories website.

Find out more about the WildlifeTrust’s Living Seas Project, and how you can be involved, on their website , and specifically on Cumbria Wildlife Trust’s website. You can also find Living Seas North West on Facebook,Twitter @LivingSeasNW or www.irishsea.org