Crossing the Sulewath: A guest post by David Livermore

Posted on July 13, 2016 by solwayshorewalker

Detail of Crawford’s 1804 map: Reproduced with permission of the National Library of Scotland.

Two big rivers feed the head of the Solway.  The Eden drains all Cumbria from Helvellyn to the Pennines, the Esk harvests a rainy quarter of the Southern Uplands. Rockcliffe Marsh separates their outlets and the OS map shows few features except for swamp.  This geography doesn’t matter if you’re speeding up the M6 and M74, but was critical in the past.  The old road crossed the Eden via Carlisle’s medieval bridge, 10 miles from the river mouth, then followed its east bank.  The Esk wasn’t bridged until 1759.   Before then you waded the ‘Sulewath’ near the Esk mouth or were rowed over at Willie of the Boats (see A labyrinth on Rockcliffe Marsh, 1884, p71).

[The Esk] which is very broad and hazardous to crosse even when the tyde is out, by which it leaves a broad sand on each side which in some places is unsafe and made me take a Good Guide which carry’d me aboute and a crosse some part of it here and some part in another place, it being deep in the channel where I did crosse which was in sight of the mouth of the river that runs into the sea….

Prince Charlie retreated northbound in December 1745, with the Esk in spate. He was lucky to get over, with the cavalry in two ranks to break the flow and the infantry marching between. ‘A Hundred Pipers’ commemorates the crossing, but reverses its direction and implies future glory, not the butcher’s bill of Culloden Field.

Wi’ a hundred pipers, an’ a’, an’ a’. / The Esk was swollen sae red an’ sae deep, / But shouther to shouther the brave lads keep; / Twa thousand swam owre to fell English ground / An’ danced themselves dry to the pibroch’s sound.

Other fords crossed the lower Eden, saving the upstream diversion to Carlisle.  Cattle drovers came this way, pushing their herds into West Cumberland.  The southbound Prince Charlie came too, outflanking Carlisle, which surrendered with embarrassing alacrity.  Old maps give the Peatwath below Castleton House and another ford at Rockcliffe.  Long beforehand, Edward I – Hammer of the Scots – died of a bloody flux at Burgh by Sands, preparing to cross and punish Robert the Bruce for insurrection. Perhaps Rockcliffe Marsh wasn’t so extensive then and the ‘real’ Sulewath, from which the Solway takes its name (see The Fords of the Solway, 1939, p58), was a long oversands route from Burgh to Gretna, punctuated by the two river channels.  That would also explain how Alexander II, returning from looting Cumberland, lost an army to the tide in 1216.  You need a long crossing for a big catastrophe.

And me? I came at the end of a 20-year project – which gradually grew and grew – to walk the edge of England. Chester to Gretna was my last coastal stretch and Cumbria became a ribbon of oversands crossings.  The light and loneliness are addictive, spiced by fear that it might just go horribly wrong.

The Queen’s Guides brought me over Morecambe Bay and I danced round Duddon quicksand with Gilly the Fiddler , failing to catch flukes with our feet. Peel to Walney Island I crossed alone, also the Cumberland Esk, its shallow water bitter cold. Autumn had come.  In November I failed to find anyone who’d take me over Moricambe Bay, Grune to Longdyke, and blistered my heels walking the road, mocked by a footpath sign at Anthorn, which points straight into the river.  I reached Glasson on Solway that afternoon but, next weekend, the rains came.  All Cumbria was awash.  Riverside paths were impassable, let alone oversands routes.  I retreated to Kent.

At last, a warm May weekend this year pulled me to Mark Messenger’s Highland Laddie pub at Glasson and to a fluid arrangement to cross the Solway, made over home-caught trout.  Saturday night’s plan was oversands from Glasson to Torduff. But it’s a neap tide, meaning that low water isn’t low enough. Spring tides are better: low means low. So, Sunday breakfast, we swap to a scheme that Mark would meet me, 2pm, at Burgh by Sands and see me over the Eden.  That would save the walk to Carlisle and I can pick up the Cumbria Coastal Way to Metal Bridge.

At Old Sandsfield, a little before noon, I see the Eden up close.  It’s big, deep, dark and muddy.

Satellite view, from Google Earth, showing the Eden, the Esk and Rockcliffe Marsh, at low tide

But, encouraged by the thought that the tide has two more hours to drop, I head inland to Burgh. At the Greyhound I drink cider and rearrange my rucksack, clearing the bottom compartment to take my boots. They’ll wedge spare clothes higher up. Then I shorten the camera sling so it rides on my chest and shift banknotes to my hat, which I tie down hard.   Some things are better dry.

Mark’s van interrupts my drink and we lurch down a rutted lane, scraping the chassis, then walk over pathless fields.  Reaching open marsh, we cut a quarter mile south of King Edward’s monument, then turn north, over channels bridged by concrete drains.

A short half-mile brings us to a sandbank next to the Eden, where I make a fool of myself struggling into borrowed waders – with a shoulder strap caught under my crotch.  Other estuaries I’ve done in shorts and trekking sandals.  That’s my excuse.  Second try I get it right. 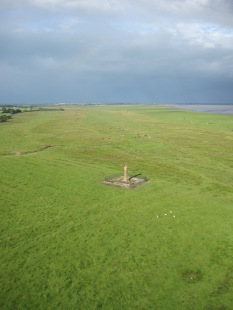 Mark suddenly suggests, ‘It’s low.  We could get over Rockcliffe Marsh and the Esk too, if you like?’

‘Have we time?’  It’s two hours to low water, and the Esk must be an hour away.  Mark must re-cross, and the upper Solway tides ebb for 10 hours and rise in two.  It’s not good to be late.

‘I’ll get back fine.  And if we can’t get over the Esk, you walk out to Metal Bridge.’ 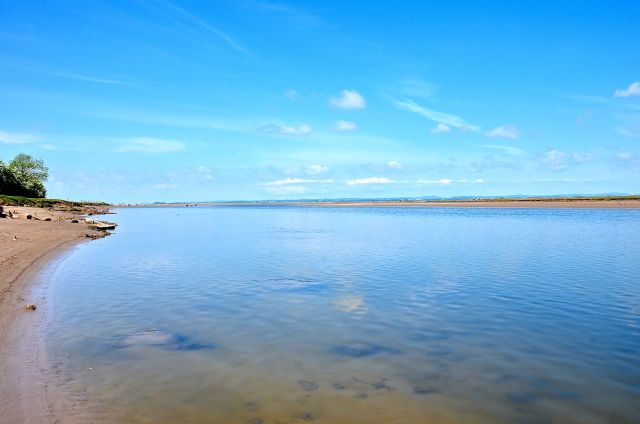 So we step into the Eden, Mark ahead and me tailing.  He carries a pole for balance and to test the bottom, which is firm. Brown lapping water deepens quickly: knees, thighs; little waves up to my waist.  Deeper than the Kent or Leven, let alone the Duddon, but not much force. I’m interested, rather than discomforted, that my right leg is filling with river.

‘We’re over,’ says Mark with satisfaction, still midstream.  We are too: the Eden turns shallower with every subsequent step until we reach the sand, where my foot acts as a pump, expelling a fountain from an obvious boot-hole.

From here we steer over Rockcliffe Marsh, which is higher and firmer than the map suggests, talking of salmon and tides, making a line towards Gretna’s houses.  Bullocks follow, friskily curious. Mark sees them as a good omen. The farmer only puts them on the marsh when it’s dry, he says. The channels, saltmarsh traps, are easily jumpable, even in waders, leastways until we hit a big evil-looking one with sloping brown sides and a bottom like watery diarrhoea.  The sides are too wide and sloped for a clear leap.

Mark goes first, hits the far slope and sinks in the ooze. I’m not sure how deeply because I shut my eyes for a moment. Which is a stupid thing to do, preventing me from learning anything useful.  As I open them he’s extricating a filthy knee and telling me to go further up.  Which I do, turning a small corner and finding a place where a cow has crossed.  Gingerly I edge down the sloping earth, then leap, landing on all fours, relieved to find that only one leg is sinking.  A quick scrabble and I’m clear, muddy handed, one wader hanging loose.

‘Have to watch for that one coming back,’ observes Mark.

To my relief, we hit no more traps.  Instead we follow the route of the farmer’s quad bike, roughly north by northeast.  Metal Bridge and its lorries are visible in a foreign world to the east. It might as well be China.  More relevant are white skeletons of trees stripped of bark and stranded on the marsh.  They mean we’re near the Esk, Mark tells me, and we talk of the winter floods that swept them down from Scotland. 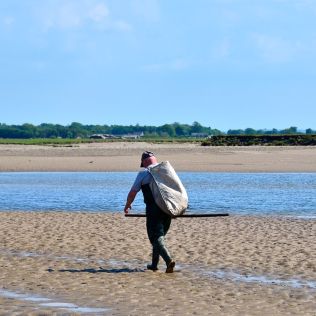 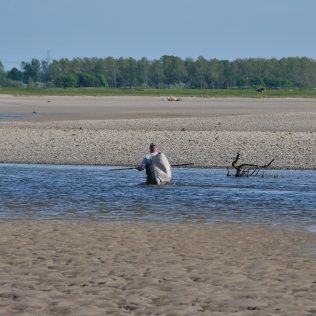 Ten more minutes we’re by the channel, on another little sandbank, from which we try to cross.  The river deepens.  And deepens.  Water from the leaking leg cascades over the fork and fills the other, from which it can’t escape.  Rats.  Even so, I’m quite relaxed: we’re half way over the Sulewath.  Then Mark halts and tells me we’ve hit a ‘pool’. So we turn and stand in the river, watching it flow around us, before retreating to where we started.  It is all slow motion.

Fifty yards upstream a little rib of stones runs out, with the water rippling over them.   Here we try again.

‘It’ll be shallower where you can see the flow,’ is Mark’s judgement. ‘It’s still waters that run deep.’

Which proves spot on.  It’s no deeper than the Eden, with a firm sandy bottom, which turns to soft mud as we reach the far shore.

Despite the weight of water I’m now carrying, I lunge 20 yards forwards, feeling the suction of the mud, but refusing it time to pull me, then drop onto flotsam besides a stone embankment.

Here, after I’ve thanked Mark and we’ve parted, I sit for a long while, catching breath, playing with the camera and changing into dry shorts. Then I make my way along the strand, crunching driftwood, till the embankment is blocked by a barbed-wired gate and the beach by a barricade of old iron. I could force this, but decide I’ve won the day, dodge round two fields and climb a gate to the old A74, shortly before it curves away from the motorway. In less than a mile I’m by the Gretna Chase Hotel.  Immediately beyond is Sark Bridge, with the ‘Welcome to Scotland’ sign.  The whole English coast is behind me, which I cannot quite believe.

I sit for a long time, thinking of 3000 miles of coast and Offa’s Dyke behind me. Or is it 4000? Everyone asks, and I’ve no idea.  The Solway was a good finish and I recall ‘kindness received at stranger hands’ – men like Mark, who have taken me on these old oversands ‘roads’, not quite lost in a world with little use for them. Then, very slowly, over an apple, my mind turns to the line ahead: 105 miles to Berwick, to close my circle.   It’ll be strange without the sea.

A bus ride later, grubby and with my hat pulled down over a broad grin, I weave my way into Carlisle’s Crown and Mitre Hotel, through wedding guests who’ve emerged for a cigarette: dark suits, loosened ties, white gloves, smooth satin dresses. The desk manager look askance at this approaching tramp, delegating me to a junior, who enquires if I’ve had a good day.

My grateful thanks to David for taking the time to write this account of this northern finale to his epic walk.

I walked a short part of the Solway coastpath with Professor David Livermore last year. Knowing of my own Solway crossing from Bowness, and my blog-post about the ancient ‘waths’, he’d been in touch with me to ask if I knew anything about the possible crossing of Moricambe Bay and the River Wampool at Anthorn. I went on a (slightly unnerving and unsuccessful) recce for him, and also was glad to put him in touch with my friend, the guide and haaf-netter, Mark Messenger, who subsequently very ably guided him across the river waths.