Posted on August 19, 2016 by solwayshorewalker 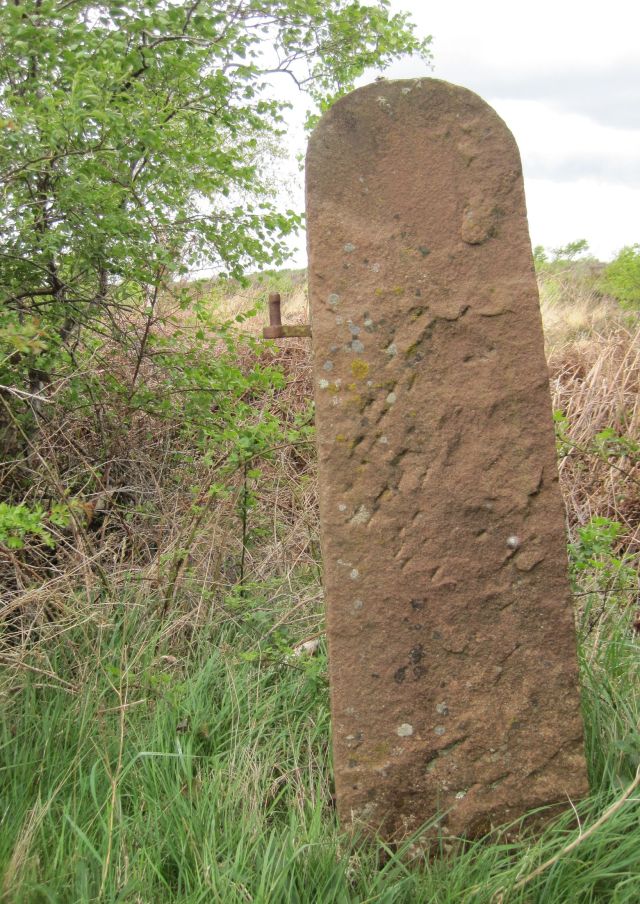 The iron bracket hints at the old stoop’s former purpose

Gateposts don’t normally attract our attention, so it is easy to miss the fact that many of the ‘posts’ supporting field gates on the Solway Plain are not posts at all, but are the traditional red sandstone pillars – known as ‘stoops’. Aged by the weather, streaked with rust, their bright colour dimmed by pale encrusting lichen, they book-end wooden or metal gates – or, rusty brackets the only hints of earlier purpose, empty spaces. They were set in the ground at a time when farm-machinery smaller, but as tractors and combines have ballooned in size, so these field openings have often become too narrow for access; stoops have been broken or removed, replaced with wood or concrete posts that are atypical of the landscape and not aesthetically pleasing.

One of the ‘heritage landscape’ projects of the Solway Wetlands Landscape Partnership has been to commission new stoops and reinstate these traditional features of the Solway landscape.

With the help of the Solway Coast AONB, the Solway Wetlands team identified potential sites for replacement and, Chris Spencer, the Project Manager, told me, “landowners were approached with the offer of replacing missing or wooden or concrete gateposts with the sandstone stoops”.

Twenty pairs of stoops were ordered from the Cumbrian Stone company in Penrith. The pink stone, glistening with quartz particles, is typical of the Penrith red sandstones, ‘aeolian’ sandstone, formed by in wind-blown dunes, and was quarried from Bowscar Quarry to the North of Penrith (1) and subsequently cut, shaped and carved by masons at Cumbrian Stone before being delivered to the RSPB’s Campfield Reserve near Bowness-on-Solway. 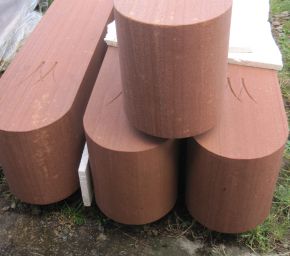 Here, on a windy and bitterly cold day in March, people gathered for a ‘stone-carving workshop’ arranged by SWLP under the guidance of stone-carver Tom Baron, who showed participants how to mark out and then cut the outlines of the herons that were to be carved on the two stoops for the Reserve. 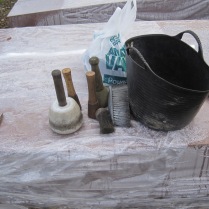 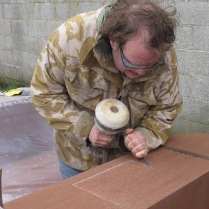 Later in the year, holes were dug and the stoops installed, with the help of Dinsdale Moorland Services (2), in gateways around the Solway Plain. Local blacksmiths produced the bands to enable the gates to be hung. 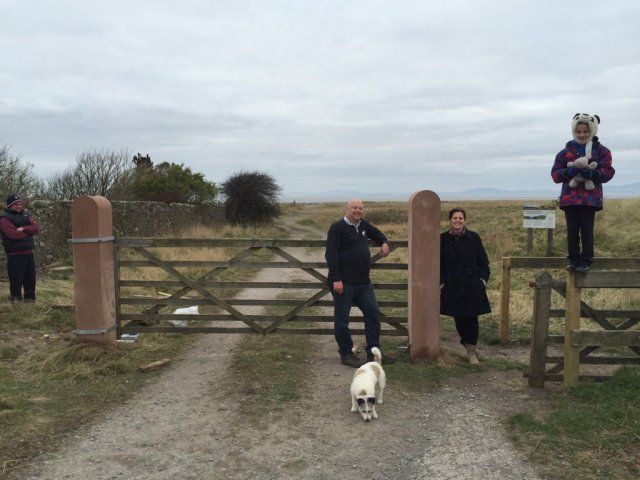 Chris Spencer, Solway Wetlands’ Project Manager – with one set of stoops in place

There are new stoops at one of the entrances to Natural England’s Glasson Moss, and on field-gates near Bowness and next to the line of the old canal and railway at Glasson. All twenty pairs can be seen from the roads or public footpaths – so look out for these handsome and functional traditional structures, each engraved with a distinctive ‘W’.

“I spy with my little eye, something beginning with S” …