Posted on October 19, 2016 by solwayshorewalker

On Monday night the full moon, its face very slightly squashed, shone down on a stormy Solway Firth. The brown silt-laden waves pounded ashore and shortly after midnight the incoming tide that was battering the sea-defences at Dubmill Point reached its highest level at just over 10m above Chart Datum. And then, as physics ordains and, despite the northerly wind driving the waves ashore and trying to fight the sea’s retreat, the tide dropped and dropped, and the newly-exposed shore at Allonby stretched further and further into the Firth. As is the way of the Solway, the good low tides are not at convenient times, and thus early on Tuesday morning the Allonby shore (1) was deserted, apart from one man and his dog. 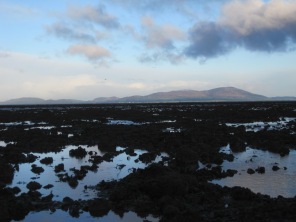 The sun rose behind Skiddaw in the North Lake District, hidden at first by heavy cloud, but then breaking through to shine on the righteous in Dumfries-shire, leaving us Cumbrians – for several minutes – in the gloom.

I didn’t waste time investigating the mid-shore rocks with their dense coating of small mussels but walked and splashed straight down to the water’s edge, to follow the tide out before it turned. Past the wreck of the ship’s keel, still decorated with green algae, beadlet anemones, barnacles and the sandy tubes of a small colony of the honeycomb worm Sabellaria; noting in passing that the heavy, rusty chain had broken away from its fixture. 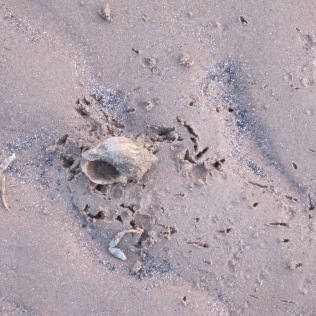 I rescued an upside-down hermit crab that had been stranded on the sand; two others had been ‘rescued’ by gulls.

And then I was where I wanted to be: amongst the Sabellaria (2), amongst a strange shorescape of dark sculptures, projecting from the water. On a low tide such as this, the reefs and mounds and clumps appear to stretch out endlessly into the Firth. They trap pools of still water which reflect their beguiling forms.

‘Hanging Stone’ amongst the reefs

Sunlight was creeping towards me, turning the reefs golden as it touched them; this was a time to stand still, to watch as the shore was transformed. 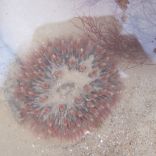 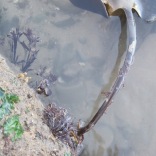 Ulva, red Chondrus crispus, and the stalk of Laminaria

The Sabellaria reefs provide a haven for other sessile animals: sponges –the  lumpy green blankets of the breadcrumb sponge Halichondria, pale fingers of Haliclona and, unusually, the pink sponge Adocia cinerea; there are delicately branched hydroid colonies and the flatter colonies of the bryozoan Hornwrack, Flustra: all of them animals which are fixed in place, and must wait to trap passing food.

Green algae and green sponges on the reefs

I wander amongst the pools, lifting weed and stones, bending to peer under rocks and poke amongst the reefs. Today I am alone, I’m not a ‘low-tide guide’ with responsibilities, and there’s time and space in which to rediscover that ‘sense of wonder’ which, in this troubled year, I’d felt I was losing. For this is not just a matter of ticking off a mental check-list of ‘species found’, exciting though that is. It’s a time to think about the life-styles of these animals and algae, to think about how they live and feed and, above all, to think about their inter-connectedness and inter-reliance. And how the state of the Solway Firth – the height and times of its tides, its temperature, its energy, the sediment it carries – affects the stability of these reefs and their occupants.

Time passes, there is a stillness everywhere, even amongst the few gulls and wading birds.

Then gradually I become aware of a gentle noise, a bubbling of water amongst stones, as if from a beck. The sea is returning.

Scum on the water

Some of the lagoons are still emptying into the sea but now there is a pale scum of bubbles on the surface, the sure sign that the tide has turned and the incoming water is picking up sediment.

I have to leave – and I know this is the last time that I’ll be amongst these special, low-shore reefs until the next very low tide, several months hence.

On the way back I make a diversion to look at the oyster lines, where American oysters, Crassostrea, are packed together in suspended cages. Filter-feeders, they open their shells and filter the water across their broad gills when the tide comes in, trapping organic particles and extracting oxygen. Despite, or perhaps because of, the Solway’s sediment-laden water they seem to be growing well; some are more than 10 cms in length. They will be sorted and sent away to cleaner waters off southern England to complete their growth.

The contents of the cages

A few years ago, on one of my shore-walks the oysterman Wilf Morgan opened shells with his pen-knife and handed them to the walkers to eat. A few weeks later, I found an opened shell and half a lemon on one of the posts.

(1) Allonby Bay on the Cumbrian coast, was designated a Marine Conservation Zone this year. See also my post ‘A slimy dangerous place?‘

(2) There is much more about the Sabellaria reefs and platforms along the Cumbrian coast in my book The Fresh and the Salt, in Chapter 1 ‘Invertebrates on the Edge’