Dune walk (with one diversion)

Posted on July 4, 2014 by solwayshorewalker 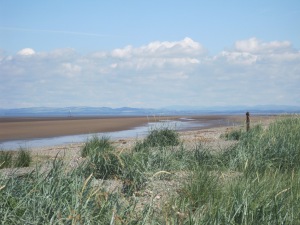 My guided shore-walks are ‘vertical’, from the bottom to the top of the shore – we usually spend a lot of time looking at the animals near the low water mark, with diversions on the way back to see the submerged forest (if the sand hasn’t hidden it) and to beach-comb along the high-tide line.

But on the first day of July, in calm air and bright sunshine, I walked ‘horizontally’ along the top of the shore, from Wolsty Bank to Bank Mill Nursery just South of Beckfoot, keeping to the edge of the dunes (apart from one interesting diversion).

Stepping down from the well-vegetated dunes at Wolsty, I wandered along the intermediate zone, neither shore nor dune, which is being colonised by sand- and salt-tolerant plants: lyme and marram grass; sea-spurge; white bladder-campion; vetches, blue and yellow; bird’s-foot trefoil (there is very good illustrated explanation of dunes and their vegetation here).

A single purple-red pyramidal orchid was tall amongst the grasses, and there was a concentration of empty shells of the banded snail, Cepaea, beneath a silvery-blue sea-holly, the shells a range of colours, yellows, pinks and pale-browns.

But it was the number and variety of butterflies and moths that astonished me; they fluttered and selected and settled, and fluttered again. I’m not good at identifying butterflies but there were Common Blues, Meadow Browns, Ringlets, even a Red Admiral later on. And a Burnet Moth, in striking red and black, gripped a stalk next to its empty pupal case, unmoving as though startled at its own transformation. 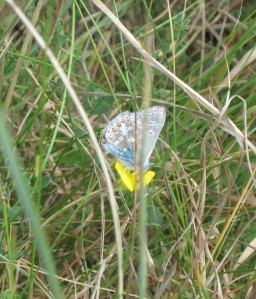 Reed Buntings followed me for a short distance, flying from stem to stem of the tall Lyme Grass, gripping the stalks sideways as they watched me. Larks rose up twittering, no longer ascending high to sing, from the mature dunes, and sparrows pottered amongst the vegetation on the sand.

The tide was way out, and the sand stretched smoothly towards Scotland. A man and a woman passed me, carrying chairs: they unfolded the chairs and sat on the empty sands, side by side but facing in opposite directions, perhaps the better to talk to each other. Jack Vettriano would have painted them.

The dune faces had taken a battering during the storms and tidal surge at the turn of the year, and new defences consist of huge blocks of limestone. Someone was sun-bathing by the stones, naked or in skin-coloured underclothes, so I dipped down onto the shore to check out the tidelines: no treasures this time, not even heart-urchins.

But around the sea-cut face of the dunes further along there was a cloud of sand-martins. This is the first time I have seen martins there (apparently their nests were washed out when the dune-face collapsed in the 2009 storm). I sat on the sand and they swooped and chattered around me, occasionally diving in their nest-holes. It was a privilege to see them and to be so close to their small village.

My diversion from the upper shore was to talk to a man who was digging for lugworms. He was working in a particularly good patch, that was dotted with thick worm-casts, and he was digging a trench with a fork, lifting out divot after divot of compacted sand, and pulling the long fat worms out of their burrows.

We stood in the sunshine and chatted about worms, and fishing – unusually, fishermen on Silloth pier have been catching skate this summer – and ‘our Geordie friends’ who come over from the North-East and strip the lower shore of bucket after bucker of ‘peeler’ crabs’, which they sell for bait. I had seen the extent of their morning’s ‘catch’ myself, and was horrified; the crab population is no longer sustaining itself and local fishermen struggle to find even a dozen for bait.

A bucket of lugworms

The worm-digger was going to use his worms to fish from the shore for bass.

Heading back and up onto the top of the dunes, I found cinnabar caterpillars on the ragweed, and more Common Blue butterflies, the same bright blue as the harebells around them. A kestrel, ‘wind-hover’, held station high above its hunting-ground. 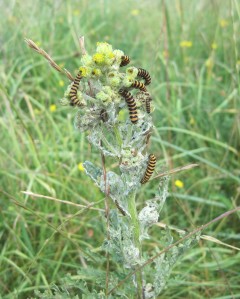